The first-ever DraftKings Sports Betting National Championship (SBNC) is just more than one week away, taking place in Jersey City, New Jersey, from January 11-13, 2019. More than 30 people have already qualified for the event via daily fantasy sports (DFS) contests on DraftKings, and that number is only going to grow as more qualifiers and satellite contests run in the days leading up to the event. One of those qualifying contests is being hosted by professional poker player Phil Hellmuth, who is also an avid sports bettor and will be competing in the SBNC.

“I’ll be there, and I’m really excited!” Hellmuth told SharpSide.com. “To me, it’s a chance to show my tourney sports-betting chops. And I love winning titles, and the DraftKings Sports Betting National Championship is a terrific title! It would be a great one to add to my WSOP titles and the blackjack tour title I won.”

Whether it’s betting at the poker table or wagering on something else, such as sports, Hellmuth makes a living in the gambling world. Here’s what he had to say regarding the strategy involved when competing in the DraftKings Sports Betting National Championship.

“There are so many schools of thought that go into this contest,” Hellmuth said when asked how his wealth of experience as a poker player might translate to success in a sports betting contest such as the SBNC. “One theory is to bet the entire bankroll on the first game Friday afternoon, another is to bet a few parlays, and a third is to bet slowly over the first day and a half. But, above all, if you want to place top three, then you’ll have to pay close attention to ‘chip leaders,’ so to speak, and vary your bets accordingly.”

With more than $22 million in live poker tournament winnings and 15 World Series of Poker gold bracelets, Hellmuth certainly knows how to win as a professional poker player. In similar fashion to a poker tournament, the SBNC is going to involve taking calculated risks. Some of those risks might be big ones and involve putting it all on the line. That’s something Hellmuth says he is prepared to do should he need to.

“Understanding that all of the players in this contest are betting their own money (we all start with $5,000 and keep the total Sunday evening), one big edge I have is this: if I have to bet $100,000 or more on the last game to win, I’ll pull the trigger,” Hellmuth said. “Whereas, most of the contestants will not! You see, there are a lot of qualifiers that won an entry for $5-$100, that will be happy to leave with $5,000 or $10,000, and thus they won’t make the big bet to try to win the $1 million first-place prize. Imagine if the WSOP Main Event let people cash in their chips at any time!”

The contest Hellmuth is hosting on DraftKings is free to enter and takes place Sunday, January 6, 2019. It’s an NFL contest focused on the two NFL playoff games taking place that day, first between the Baltimore Ravens and Los Angeles Chargers and second between the Chicago Bears and Philadelphia Eagles. The contest will award one $12,000 package to compete in the SBNC for a chance to take home the $1 million first-place prize. Additional prizes will be awarded to others that finish in the top 54.

The first-ever DraftKings Sports Betting National Championship features a $10,000 buy-in, a $2.5 million guaranteed prize pool, and more than $1 million set to go to the winner.

SharpSide will be onsite in Jersey City to provide coverage from the event, so stay tuned to SharpSide.com and follow @SharpSideApp on Twitter for more. 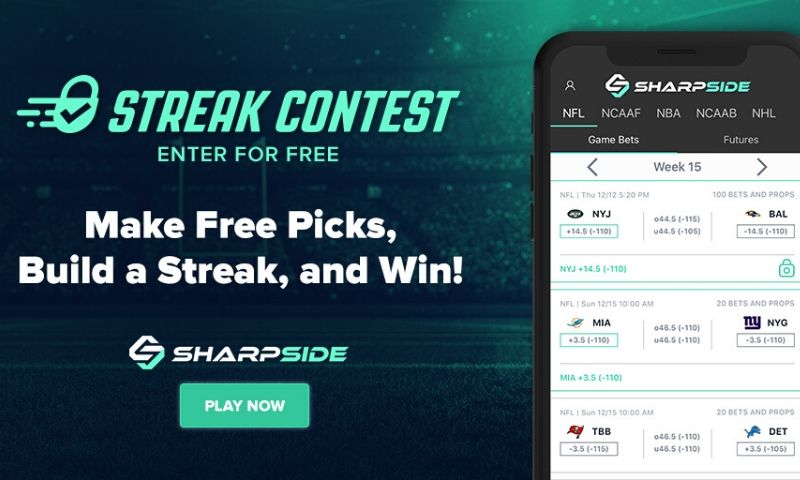